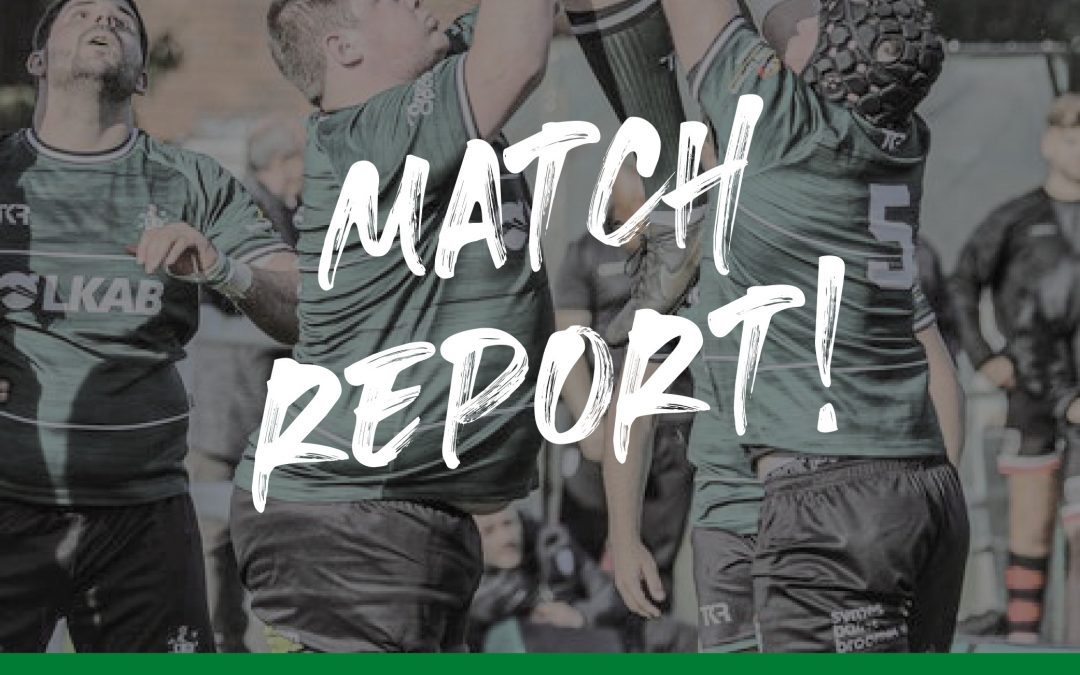 A sunny & breezy day at Heslam Park saw Ilkley play here for the 1st time, Scunthorpe had returning Nick Syddall, Ben Hyde, Josh Bird, Si Fisher and with a shortage of hookers an ever youthful Gareth Mist. There were also a few positional changes with Joey Mowbrey at wing forward and Connor Brewster making his home starting debut. Ilkley kicked off with the breeze at their backs playing towards the Queensway end. Ilkley set out their stall using their forwards in the early skirmishes and being rewarded with a kickable penalty which went wide. Scunthorpe then started attacking with Josh Lugsden who got over the line but was held up by the No.8 for a goal line drop out. Scunthorpe ran the ball back which produced a penalty and Scunthorpe kicked for the corner. Line-out won, Ilkley repelled the initial drive but again were penalised for a side entry at the maul. From the resulting penalty the famous Bridlington was called and a try scored by Si Fisher converted by Connor Brewster. Scunthorpe 7 Ilkley 0. Ilkley kicked off once more, Scunthorpe caught the ball and set a ruck, the ensuing box kick was well taken by the Ilkley No 8 who fed the ball inside, another ruck formed by the Ilkley forwards, the ball went down the line for Ilkleys full back to go over behind the posts. This was converted and Scunthorpe 7 Ilkley 7 with 15 mins gone. The game then drifted into a stalemate in midfield, culminating in a penalty to Ilkley and the Ilkley 10 then converted, Scunthorpe 7 Ilkley 10. 30 mins gone. Scunthorpe then started putting together numerous phases and were in the Ilkley 22 when an interception pass gave Ilkley the ball for the centre to run the length of the field on the stroke of half-time to score under the posts. This was converted Scunthorpe 7 Ilkley 17 Half-time.

Scunthorpe kicked off the 2nd half with the breeze which had picked up behind them. Ilkey kicked away from a ruck and Josh Lugsden caught the ball and chipped ahead for the ball to bounce straight back into his hands and run over for a try under the posts. This converted by Connor Brewster. Scunthorpe 14 Ilkley 17.
Ilkley kicked off again Scunthorpe caught the ball and kicked into the Ilkley 22 the player then kicked forwarded only to be impeded by Nick Dyson who the referee then inexplicably gave a yellow card to. This seemed to galvanise Scunthorpe who after a couple of defensive sets broke with Colin Chapman leading the way. Further forward momentum and numerous penalties later found Scunthorpe on the Ilkley 5 metre line at a line-out. The ball was taken in the middle by Ben Hyde Scunthorpe drove on with Mick Dunk Jnr going over for a try. The conversion was missed. Scunthorpe 19 Ilkley 17 52 mins gone. The referee issued a general warning to Ilkley for their persistent infringing.
Ilkley kicked off again and after a passage of play Ilkley won a scrum from this a free kick was given for an infringement, a quick tap by the scrum half saw the ball passed down the line to the Ilkley winger who scored in the corner. Conversion missed. Scunthorpe 19 Ilkley 22. 60 mins gone. Scunthorpe kicked off once again and eventually got the ball back with Colin Chapman kicking a 50-22 setting Scunthorpe up with a line out just inside the Ilkley 22, Scunthorpe won the ensuing line out and were then given a penalty after further infringements by Ilkley. Their 18 received a yellow card as the latest culprit. Scunthorpe kicked for the corner and won the line out. Another penalty was tapped but some skullduggery from both sides led the referee to have words with both captains about discipline. A scrum was given to Scunthorpe as they were in possession, from this number of phases and a try was then scored from near to the line by Kane Linklater. Conversion missed. Scunthorpe 24 Ilkley 22. Ilkley kicked off and newly on the pitch Gav Hale caught the ball only to be high tackled giving Scunthorpe a penalty. The line out was lost and play they became fragmented with both sides giving the ball up. A penalty conceded by Scunthorpe saw Ilkley play from a line out and eventually after numerous drives through the forwards scored at the side of the posts.This was converted. Scunthorpe 24 Ilkley 29 with what appeared to be little time remaining. Scunthorpe kicked off, the ball was reclaimed by Ilkley who kicked the ball back to Scunthorpe this was picked up by Colin Chapman who danced his way into the Ilkley 22 leaving 2 players in his wake. More pressure was applied and Ilkley gave away a scrum from a knock on. The Scunthorpe pack held the ball and Ilkley tried to walk the scrum round as they had all afternoon, this time it was to their detriment as it took their defenders away, with Gav Hale picking the ball up and carrying two defenders with him pushed his arm out like Inspector Gadget to place the ball on the line to tie the scores up. The try was converted by Connor Brewster Scunthorpe 31 Ilkley 29
Ilkley kicked off and after a short passage of play. Scunthorpe kicked for touch and the referee blew for full time. Scunthorpe 31 Ilkley 29. Scunthorpe at last have a win in the new league with 5 points. MoM Gavin Hale 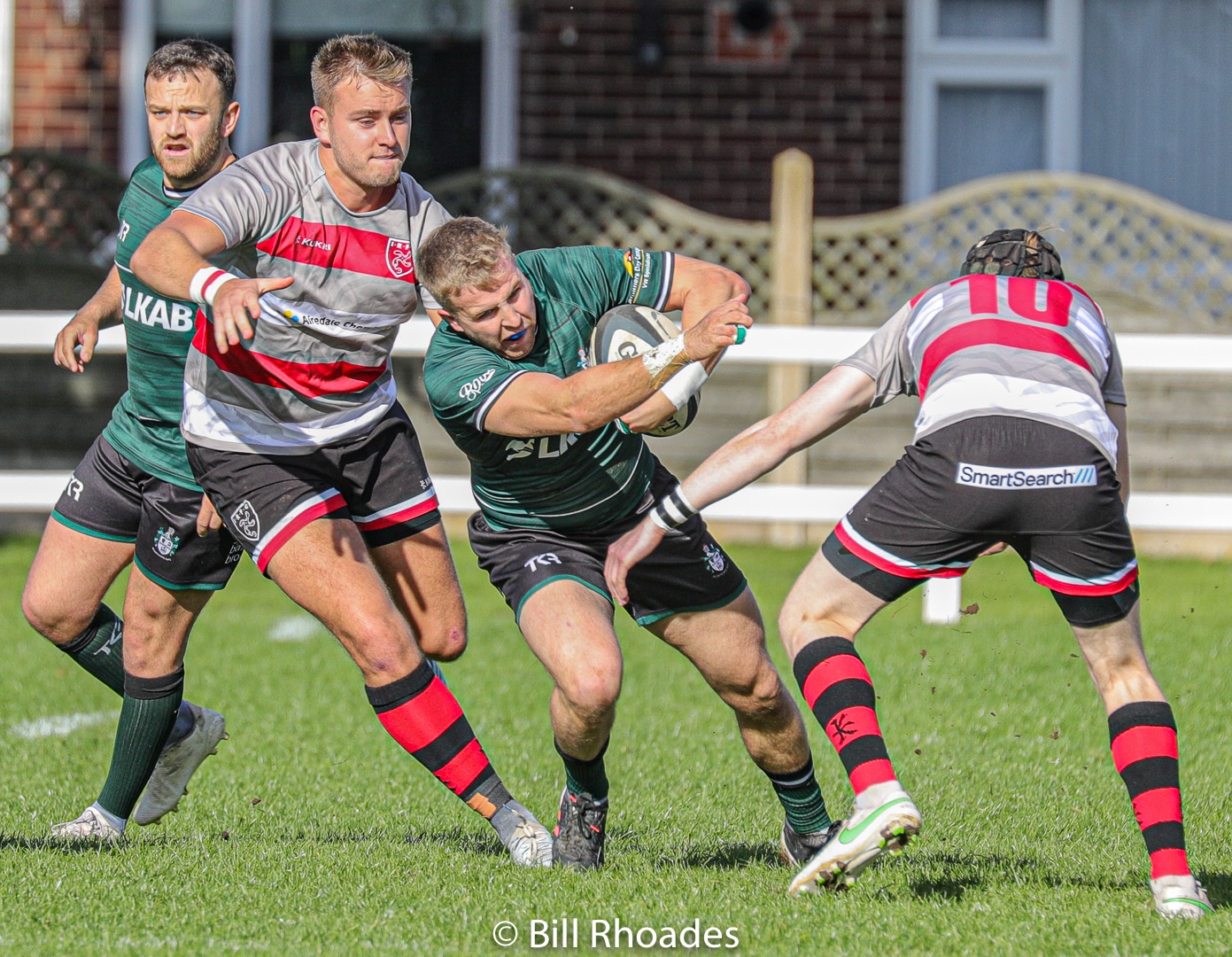