It was a glorious day for running rugby at Heslam Park when Scunthorpe came up against a team in Nuneaton who played much better than their lowly position belies.

Man of the match Josh Lugsden got the first of his hat trick tries after 2 minutes. Nuns kicked off but Scunthorpe nicked the ball, drove up the park with several phases of possession and some strong running form Joey Mowbrey and Lugsden. Eventually the ball went wide from a breakdown and Lugsden scored in the corner. 5-0. Nuns came right back from the kick-off and stole the ball, the Greens gave away a penalty and the opposition capitalised by scoring through their impressive fullback Matt Guilfoile, Rickie Aley converted to take the lead 5-7.

Five minutes later Ben Hyde scored a great try. Nuneaton kicked a penalty to touch but it did not cross the whitewash and Scunthorpe counter attacked. The young starlet Josh Lugsden was in imperious form and raced 50 metres, the ball was recycled to the ever-present Nick Dyson who burst thorough the ruck in typical style to take it on further. The ball came back to Hyde and he crashed over to score, Tom Alldridge converted this time to nudge the lead in Scunthorpe’s favour.

It was a good game for the impartial observer because as soon as one side scored so did the other.  On 16 minutes from the kick-off again, Nuns turned over the ball and from an overlap the pacey wingman Jamal Gask Clarke scored in the corner, Aley missed the conversion. 12-12.

Tom Alldridge missed a tough penalty chance and then Nuneaton scored again this time through No8 Martin Wood. It came from another Scunthorpe penalty offence, this time the massive pack opted for a scrum and put the Greens under further pressure. Wood crashed over and Aley converted 12-19. Tim Robinson’s men did not see this coming when they started the game, and it was going to take some effort to claim the points. Josh Lugsden came to the rescue with his second try. Quick ball from a scrum saw the ball go through several pairs of hands and make enough territory to allow Lugsden to race over for the 5 pointer, Alldridge missed the conversion. 17-19. Two minutes later Nuneaton transgressed, and skipper Foster opted to go for the corner rather than 3 points.  They couldn’t take advantage but were saved as Nuns gave away another pen. This time the pack exploited the situation and drove over the whitewash from a catch and drive line out. Tom Alldridge claiming the honours and converting his own try. So as the topsy turvy half came to an end Scunthorpe went in for their cuppa 24-19 to the good.

Ollie Cole came on for Al Fagan to try to shore up the scrum. In the first ten minutes of the 2nd half Scunthorpe gave away an unusual number of penalties and put themselves under undue pressure. However, their resolute defence kept the opposition at bay. Skipper Tom Foster in his forty first year, relieved the pressure with a super break out of his 22 into enemy territory. Nuneaton gave away a penalty and from the resulting line out the ball was surrendered, and Nuns got out of jail. On 55 minutes Josh Lugsden set the match a light. At half the age of his skipper he too raced 50 metres, dodging tackles, to make massive inroads into the other half. The ball was recycled and Lugsden finished of the move he started to claim his hat-trick, Alldridge converted from the touchline. Scunthorpe now had an impressive 31-19 lead. However, Nuns were not done yet and after a long delay for an injury hooker Lewis Addleton crashed over from their excellent catch and drive line out, Aley converted and the were back to within 5 points at 31-26.

Scunthorpe do not have the biggest set of forwards and were very grateful for the added bulk of Ollie Cole. What they lack in size they make up for in dogged determination and resolute defence. They also play for each other and are always there to back each other up. This was clearly demonstrated when Liam Brunt got a well-deserved try on 68 minutes. From the kick-off Scunthorpe stole the ball through Ben Hyde, it was recycled, and Brunt went over in the corner. Alldridge converted. 38-26 and Scunthorpe were surely safe. By this time Nuneaton had blown up and were losing players left, right and centre. Another key to success is the superior fitness of the Greens who are able to play for the full 80 minutes. Nuneaton opted to kick a penalty in effort to try to get to with 7 and claim a losing point. This nearly came to fruition as they battered the green try line but once again the tenacious defence held out. As the game ended a classic touch of skill from prop Ollie Cole delighted the crowd. Nuneaton kicked deep and Cole was under it, he called a mark, worthy of any full-back. From the resulting kick the ball went to touch – game over.

Scunthorpe fought hard for this victory and they came up against one of the best teams they have played so far. They rise to 3rd in the league and have a week off next Saturday.

A mosey out into the countryside to market Rasen, earlier in the week it looked like this week was gonna be a washout as Rasen could only find 11 men who could cross the line to play the mighty green machine, so the green men gave them 4 men to aid the carrot munchers. Big hand to Adam Day, George Hutton, Joe Tune and Tony Grey. Who all pulled on the red and green tops.

Also lads from skegness and grimsby stepped up to assist Rasen in their hour (80mins) of need. From the 1st whistle Scunthorpe dominated taking the game to the mixed men of Rasen. With early score from the the man, the myth, the legend that is Gavin Hale. From then on the tries rained down so fast “the weather girls” nearly renamed their song. Even our decrepit vice captain bagged a 80 m try, (and we all know about it, by next week it will be 200m) we’ll done Robbie Goodyear.

When the half time whistle came the greens were up by 5 tries, 4 converted by Robbie golden Boot (only miss was his own try, try getting closer to the sticks next time buddy) The second half rolled on, and so did the greens attack.

The big mullet (Ricky smart) and the body (sam Proctor) went over to help the struggling Rasen crew. But even with these powerhouses Rasen couldn’t change the deficit. With the greens running away with the victory. Zack Kelly scoring the final try, the Rasen ref called the game . 5-56 Scunthorpe.

Well done boys another outstanding performance. MOM Gavin Hale. DOD Lloyd Elliott Akers for the worst drop kick in history. We are away at the seaside next week, same again boys. 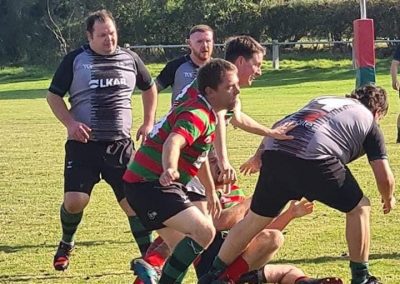 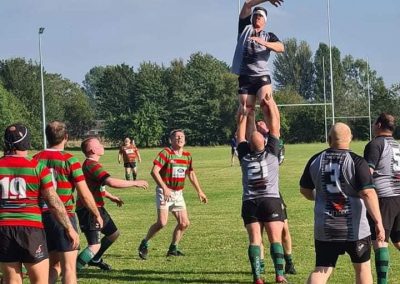 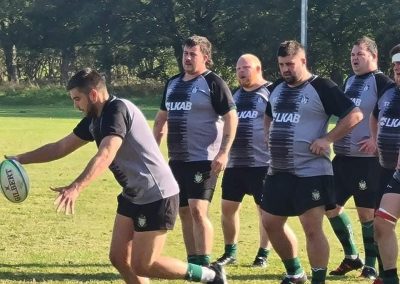 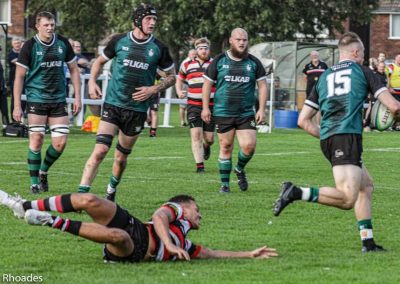 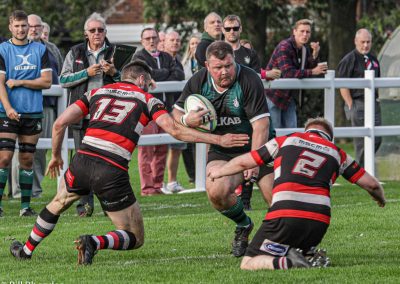 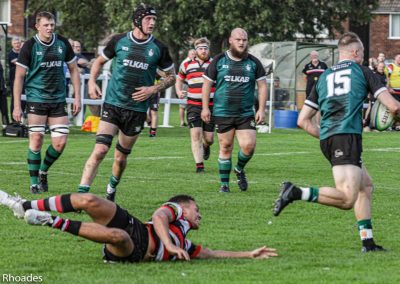 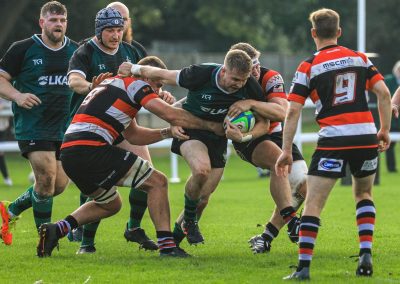 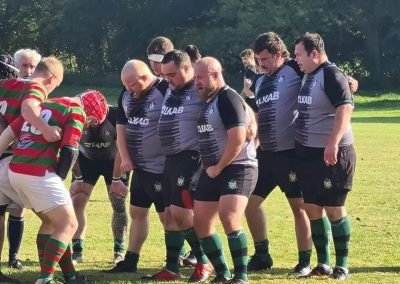