Heslam Park, with its new pitch side fencing and a perfect playing surface, a credit to the groundsman, provided the stage for two teams that had both won two games and lost one.

The warm humid afternoon did not stop both teams playing high tempo rugby from start to finish. In the early exchanges Dudley’s Rhys Harper kicked well to take advantage of the new 50-22 law to gain field position. Only excellent Green defence stopping this early pressure gaining the visitors points.

After twenty minutes of hectic, but scoreless rugby, the Greens broke the deadlock when some crisp passing resulted in winger Colin Chapman touching down. Tom Alldridge adding the conversion. Although the visitors continued to press, their only reward was a Steff Shillingford penalty on the half hour. Scunthorpe struck again when, following a driving series of pick and takes, Tom Foster spotted a gap this had opened in the opposition defence and glided through. A couple of passes later James Dyson got the Greens second, unconverted, try. Another followed minutes later after a Tom Foster penalty gave his side a line out in Dudley’s 22. After a strong catch and drive the ball went out to Josh Lugsden who powered over the line to make the half time score 17-3 to Scunthorpe.

The home side started the second half as they ended the first-with some highpressure rugby that saw Tom Foster score the fourth, bonus point, try. Tom Alldridge converted. Dudley now had a dominant spell when they gained the lions share of the ball and territorial advantage. But initially, due to some inaccurate kicks and strong greens defence-which featured some aggressive running out of defence by Will Harrison, their attacks went unrewarded. Then, after another lengthy build up Rhys Harper made the best kick of the afternoon and found hooker Ben Rhodes in space. He strolled in to score the visitors’ only try that was converted by Steff Shillingford.

This score galvanised the Greens and they roared back into the attack. First a driving maul saw Jack Brunt peel of and speed his way past three defenders to score. Then came the try of the match when some slick passing by the Green backs ended with Tom Foster looping around to score in the corner. Tom Alldridge’s successful touch line conversion completed the afternoon’s scoring 31-10. In the last dozen minutes of the game the ‘never give up’ visitors attacked with great determination, but were denied by some outstanding defending.

After this weeks’ departure of Josh Bird to Hull Ionians (we wish you all the best in National 2 Josh) it was good to see Joey Mowbray play so well on his first start at 9.

After four games ‘settling in’ let us hope we can take an unchanged squad to face the formidable challenge awaiting us at Newport next Saturday.

View images from the match here. 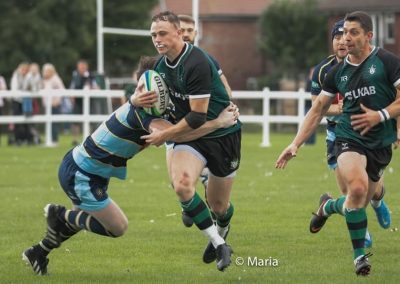 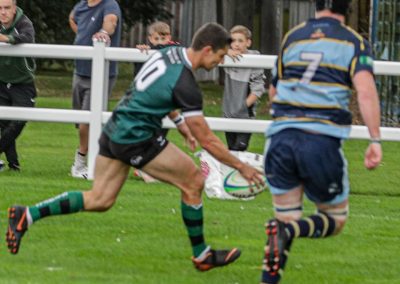 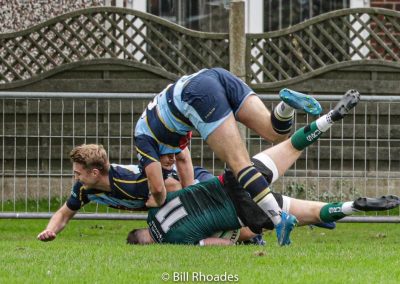 Little trip over the humber to play ionions.

Hull came back but the green army rolled over them took the second cut. 14-0

Hull spent the entire time on the back foot from the power house scrums, winning all.

Hull then regrouped and managed to scrap over and converted.

The troops rallied and ended the first half 7-21

Second half kicked off and Hull came out us with a vengeance, but the greens held them at bay, with a lucky break through Hull managed to squeeze a try but failed to convert.

Finish up the day

Yet again unable to split man if the match. 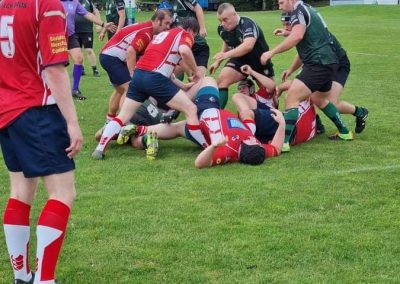 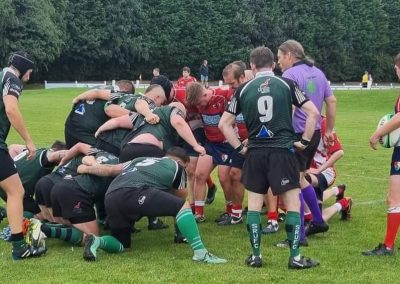 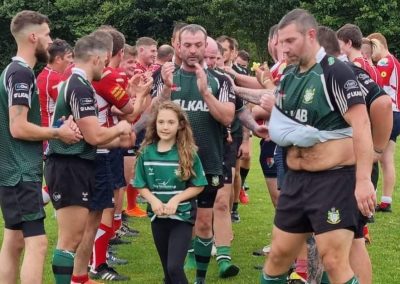 Colts league rugby back up and running with a bang.

With 2 friendlies having been played and a lapse in both of 20 minutes meant the colts shipped over 40 points, working hard to recorrect this the lads were out to lay down a marker this week from Morley who rocked up to fortress Heslam looking solid and a big set.

The sun beamed down on god’s green Heslam and the 21 charges set with wearing the proud shirts was named.

Morley kicked off and an unfortunate error led to a period of strong defence, Connor Marshall who had spilled the ball from kick off soon made up for this by making a try saving tackle and later a kick wich he won an aerial duel nearly led to a try for him. Will Horner was pushing the forwards around the field, the game ebbed and flowed but defences were on top and although the score remined at 0-0 for well over 40 minutes this was anything but a bore draw. Chances were created but just not finished from both sides.

Into the second half and a turnover effected by Charley Wilkinson (1 of 3) lead to a pen, subsequent kick to the corner, line out, which skipper Cam Christie took with ease and the ball worked its way out to Dom Crawford who stepped went again, stepped went again but was snagged a meter short. The ball went out to the backs through Jack Murr to Cian Vaughan who stepped his defender sending him the wrong way, he passed, rather than falling over the try line and Lewis Talbot scored his easiest try ever. Conversion Successful 7-0

The Scunny Colts were now charged and the kick off was fielded well, few phases later, Jake ‘Dunky’ Kreamer made a worldy offload out the back door to Lewis Talbot who set off from Queensway to hit his line through the centre of the defenders and had just enough pace to score. 12-0.

To Morely’s credit they then went down to 14 and after offering a player the lads said no we play on – huge stones to  make that decision.

Scunthorpe were now attacking and with the last play a kick was put through by fly half – Murr, which wasn’t fielded and bounced into the grateful Cian Vaughan who waltzed over the line and under the posts, successful conversion 19-0.

A superb effort from all not just the 1 to 21 but the others who make the squad up too whether not on the bench for whatever reason it was nice to see them turn up.

Man of match went to Will Horner at 9 with honourable mentions to Lewis Talbot, Dante Salvatore Redhead and Dunky 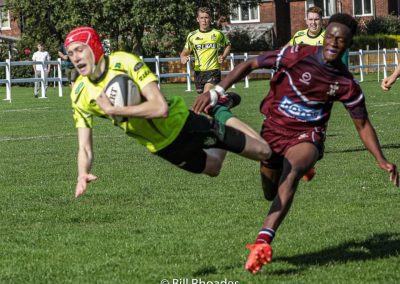 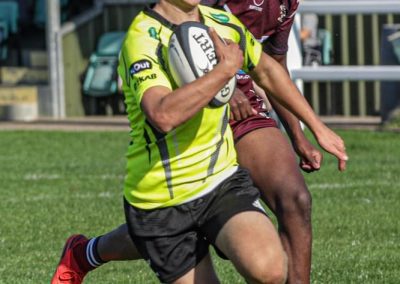 The teams were really evenly matched and the first breakthrough was when Becky Clark burst though a gap in the defence to score under the posts which Jazz Clark converted. RYTON were quick to respond and managed a try of their own which they converted too. More pressure ensued from Scunthorpe and good runs from Harriet and Holly allowed us to get on the front foot. A well worked backs moved allowed Becky Clark to put Jazz Clark into space and score again. RYTON built their own pressure which was helped by the sin binning of a Scunthorpe player for persistent team infringements, which meant they managed to drag the score back to 12 all. The last 15 mins were end to end and both teams battling hard. RYTON scored again and converted making the score 19-12. A last ditch effort from Scunthorpe with some well worked penalties allowed us to score in the corner but didn’t manage the conversion. The final score was 17-19.

A close well battled game with Scunthorpe having some new players in the green team. 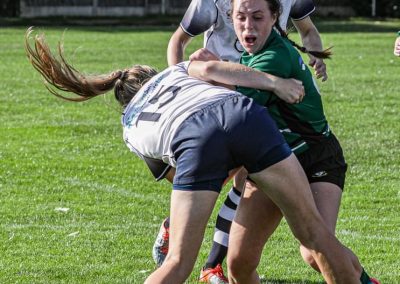 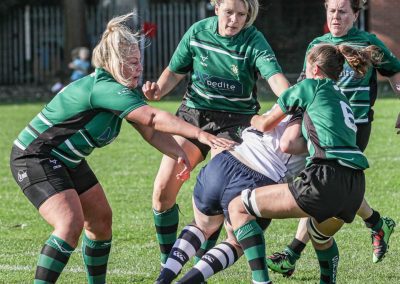 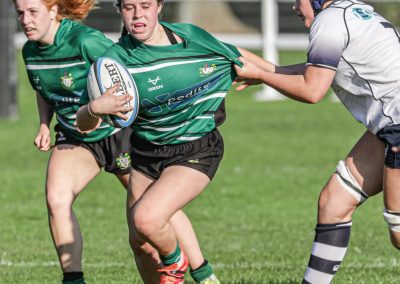